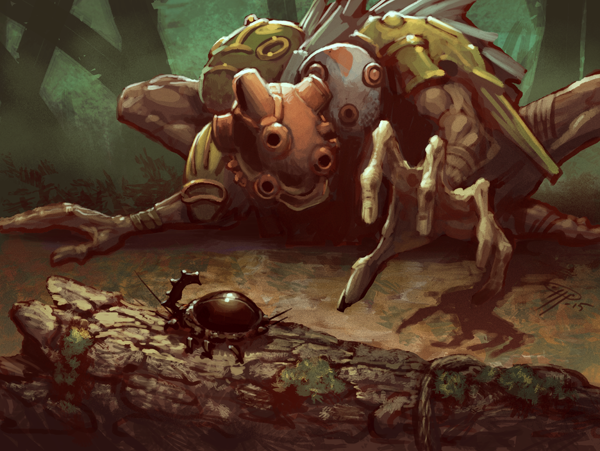 Let’s talk about the previous couple sets of balance adjustments for a moment. The previous test server patch was mainly the result of a community suggestion thread from about a month ago. These changes were held in a vacuum for the most part, independent from Echoes and all the power it would bring with it to the factions. Now that Echoes is released, we have a better idea on where the factions stand, and want to push some changes that we believe target some of the right scrolls that will help even out the playing field.

Automatons are being hit twice, but we still feel that deck style should remain strong and fun to play. We wanted to keep the same offensive power of Wind-up Automaton, but make him a little less permanent on the board for his cost. Excogitator is moving up on the resource curve to make it just a little longer before beautiful baby Scouts will be popping out onto the battlefield.

Niara’s ability is being stepped back a notch, but her base attack is being raised in compensation.

We decided not to go through with the Unbind change. We will still be keeping a close eye on it, but we are unsure if it needs to be done right now as we don’t see it severely over-performing.

Nutrition and Erode are going to remain in their original forms. We’re not confident that these changes will be best to try at this time.

There are some new changes here as well. Breaker is getting a bump, and Fierce Tactics is being given a unique ability against Ranged units. Sanctuary of the Lost is being given Magic Resistance which should increase its usefulness in certain match-ups by quite a lot (State Machines, anyone?).

Finally, Beetle Stone just doesn’t cut it in his current form. We’ve had a lot of feedback to add more anti-lingering abilities that focus on counting down instead of instant removal, and we decided that Beetle Stone was a good starting candidate for this.

All of these changes, as always, will be watched closely as the post-Echoes playing environment continues to evolve and the true power levels of the factions become more clear. We feel these adjustments are a good start.